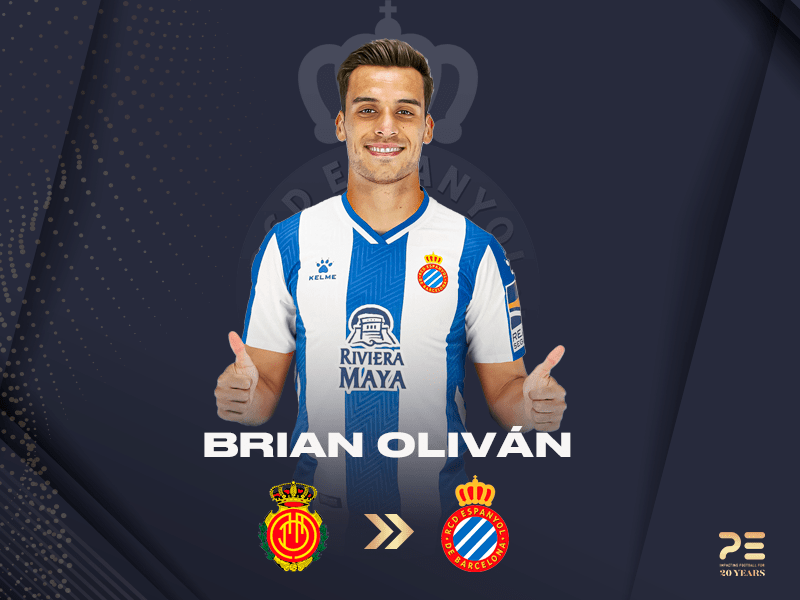 Brian Oliván, player represented by Promoesport, is the new signing of RCD Espanyol for the next season 2022/2023. The Catalan left-back arrives from Mallorca, after having performed at a very high level during the last season.

Born in Barcelona and graduated in the youth academy of FC Barcelona, he tried his luck in Portuguese football after signing for Sporting Braga reserve team and just 6 months later he packed his bags again to go to Bulgaria, to CSKA Sofia. Brian returned to Spain at the age of 20 to join the ranks of Real Valladolid Promesas in Segunda B. There he had the opportunity to make his professional debut in Spain with the first team in 3 official matches, both in LaLiga Smartbank and Copa del Rey.

The following season, 2015/2016, he signed for Cádiz, who loaned him to the Granada reserve team in Segunda B to later offer him a place in the first team. In "La Tacita de Plata" he found his best form until then, as well as regularity, and wore the yellow shirt for three seasons. In 2019 he went on loan to Girona and in 2020 he left the Andalusian club for Mallorca. In 2020/2021 he had the opportunity to enjoy the promotion to LaLiga Santander, where he competed this season.

This season, Oliván has stood out in the bermellón left back, playing a total of 2.506 minutes in 32 matches, being an undisputed starter in all of them. His good performance is also reflected in the numbers, as he has managed to finish the season with an average of 4.27 balls recovered and another 19.97 good passes per game.